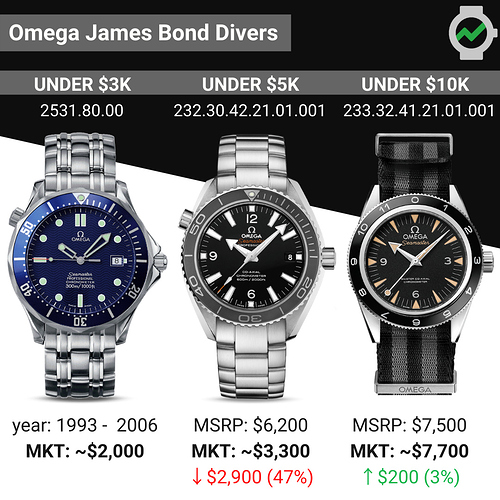 The 2531.80.00 Seamaster is commonly referred to as the “Bond Seamaster” since Pierce Bronsan wore a similar style in the 1995 film Goldeneye, the very first feature of an Omega watch in a Bond film. However, the 2531.80.00 was first introduced by Omega in 1993. The first Seamaster in Goldeneye was actually the quartz version of the Seamaster Professional chronometer but Bronsan is seen wearing the 2531.80.00 in later Bronsan series of Bond films. Although this watch was discontinued in 2006, it’s still available on the secondary market for about $2,000.

Since 1995, the Omega Seamaster has played a supporting role in James Bond films. In Skyfall, the 7th feature of a Seamaster in a Bond movie, Daniel Craig sports the Seamaster Planet Ocean 600M. This watch is available on the secondary market for about half off retail, a significant discount from MSRP. Omega also released a limited edition version of this watch with more Bond touches, such as the 007 logo at 7 o’clock, to celebrate the film.

The Omega Seamaster 300 ref 233.32.41.21.01.001 or Spectre is a limited edition of 7,007 pieces. Omega launched this Seamaster to celebrate the 24th Bond movie: Spectre. It even comes with a fitting Bond-style NATO strap! The box set features a box with a 3-digit combination, a fun mini mission for customers to decode before unveiling the watch itself. This watch’s value holds strong on the secondary market, trading at or slightly above retail.