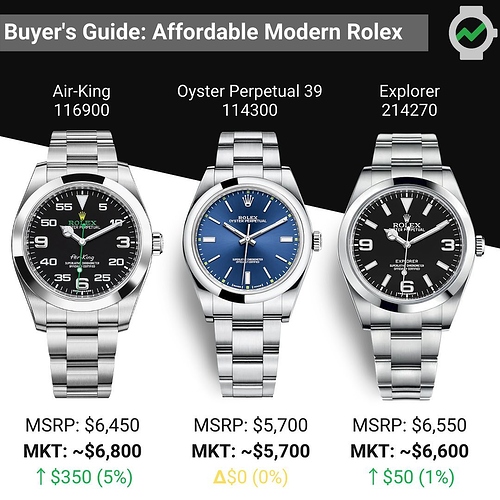 Start a Rolex collection without the aftermarket markup!

Air-King: At the end of the Battle of Britain, in 1940, the Air-King was created to pay homage to pilots who fought in the war. The modern Air-King came back in 2016 after a two-year hiatus from the model line, sporting a hotly debated new look. It’s busier, but bolder, taking inspiration from the Rolex Explorer and the dashboard of the supersonic vehicle Bloodhound LSR.

Oyster Perpetual 39: Though more modern in every way, this watch still has the same essence as the 1930 bubble-back, the first Oyster Perpetual that combined the oyster water resistant case with a perpetual automatic winding movement. It has green Chromalight lume and a reflective sunburst dial, serving as the perfect casual watch.

Explorer: In 1953, Sir Edmund Hillary, with an Oyster Perpetual, became the first to climb to the Mount Everest summit. The watch that made the journey with him inspired the Rolex Explorer line. While this watch may not be as hot as the Explorer II, with the orange GMT hand and 24 hour bezel, it certainly embodies the ruggedness and utilitarian look of Rolex.

All three watches trade around MSRP on the secondary market. This makes them compelling as most Rolex sports watches are marked up significantly. Modern Rolexes that don’t break the bank! Which one would you pick?