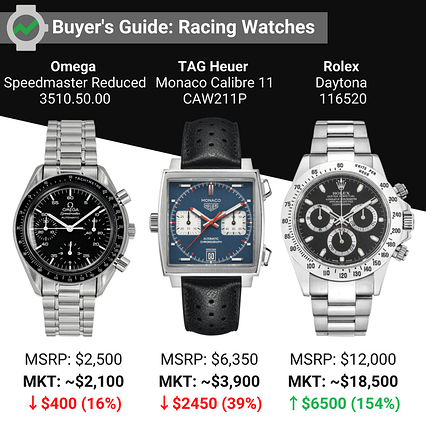 Racing watches! Carry the experience of the track on your wrist! ⁠

The TAG Heuer Monaco Caliber 11 is a classic racing watch, named after the Monaco Grand Prix. This special edition was made popular by Steve McQueen when he wore it in the movie “Le Mans.” This watch features a crown to the left, a reminder that it did not need winding, and was the first square, water-resistant automatic chronograph. ⁠

The Rolex Daytona, an exceptionally difficult watch to acquire, was propelled into popular media by the actor Paul Newman. This iconic watch, produced from 2000 to 2016, was notoriously difficult to produce due to its complex movement and labor required to make it. It has been discontinued and was replaced by the new Daytona (116500). ⁠