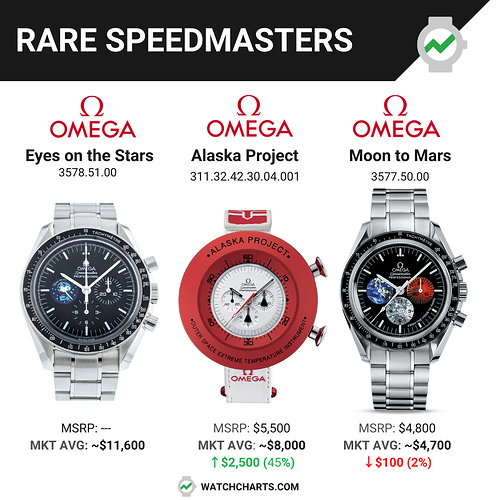 Limited Edition Omegas. Which is your favorite?⁠
⁠
Omega Speedmaster “Eyes On The Stars” reference 3578.51.00 was released in 2003 as a limited edition with the Snoopy dial. Only 5,441 pieces were made. The watch was made to celebrate Omega’s role in helping prevent the disaster of Apollo 13 when there was a system failure. This earned Omega the Snoopy Silver Award from NASA in 1970. It bears a silver image of Snoopy on the case back and dial, something shared only by the Speedmaster Silver Snoopy and the new 50th anniversary Speedmaster in blue and white. Over the years, it has become increasingly expensive in the pre-owned market.⁠
⁠
Introduced at Baselworld 2008, the Omega Speedmaster Moonwatch Alaska Project reference 311.32.42.30.04.001 is a Speedmaster with a limited production of 1,970 pieces. At the request of NASA, the Alaska Project was created to be a thicker and more robust version of the other Omega Speedmaster Moonwatches. NASA at the time was planning a mission to the dark side of the moon, where the temperatures are frigid, hence the name “Alaska Project”. The thick red aluminum casing helps shield the watch from extreme temperatures, offering resistance from 260 degrees Celcius to -148 degrees Celcius. ⁠
⁠
⁠The Speedmaster “From the Moon to Mars”, reference 3577.50, was produced from 2004 to 2008. Though it was not limited, each example had its individual production number engraved on the caseback. It features Mars, the moon, and Earth at the 3, 6, and 9 o’clock subdials respectively. The planets are designed to be photorealistic and contrast well against the black dial. ⁠
⁠
To find out more about these lesser-known Speedmasters, read our blog post at: www.wch.art/p/4676⁠
⁠
View on Instagram