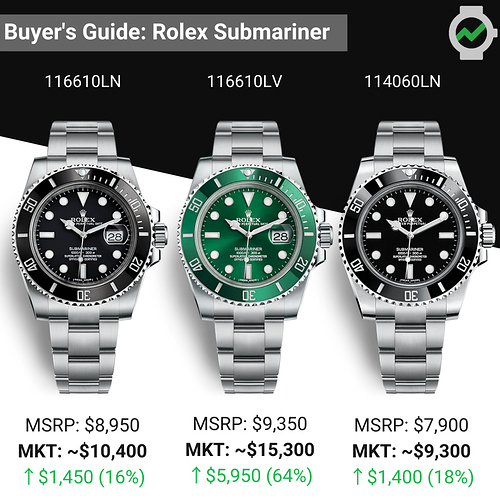 The very first Rolex Submariner was developed as a professional diver’s watch and released in 1953. It was the first watch to offer a water-resistance up to 100m. Since then, the Submariner has undergone multiple upgrades yet it still pays tribute to its styling from over half a century ago. The 16610LN features a unidirectional rotatable bezel with Cerachrom insert, Oyster bracelet, and in-house calibre 3135 mechanical movements.

The Kermit, reference 16610LV, was released in 2003 to commemorate the 50th anniversary of the Submariner. It features a green bezel, like that of Kermit the frog. However, it was replaced in 2010 by the Hulk, which is still in production today. The Hulk trades for about $6,000 more than its original listing price of $9,350.

The appeal of the no-date window is a cleaner and more true-to-history aesthetic, based on the original Rolex Submariner from the 1950s.

Looking at the price brackets, regardless of obtaining the watch through original listings or secondary listings, the no-date Sub is about $1,000 less than the date Sub. So if you’re looking into a less busy dial and a less pricey watch, the no-date is a great pick! The black dial Subs we feature both show an upward trend on the secondary market of about 16-18%, whereas the Hulk, a green-dial Sub shows a dramatic increase of 64%.