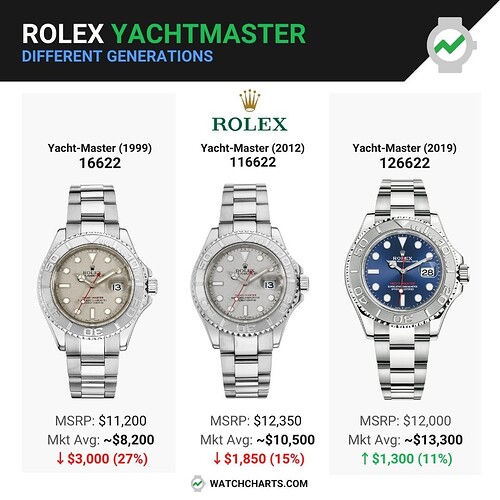 A nautical-inspired luxury sports watch - three generations of the Rolex Yacht-Master compared⁠
⁠
The Yacht-Master (ref. 16622) was first introduced in 1999 in Rolesium, Rolex’s name for platinum and steel. The Yacht-Master is the only collection to use Rolesium. Though the watch has been discontinued since 2012, it sells for 27% below retail price when on the secondary market. The watch sells for an average $10,300 from a dealer, 8% less than the retail price and a markup of 26% when sold on the private secondary market. ⁠
⁠
In 2012, Rolex released the Yacht-Master ref. 116622. The update included an upgraded clasp with EasyLink extension system and the blue Chromalight lume instead of the green lume. This watch sells for an average of 15% below retail price when sold on the secondary market, and 8% above retail from a dealer.⁠
⁠
In 2019, Rolex once again refreshed the Yacht-Master. The 126622 sports an updated dial with the Rolex crown at 6 o’clock and between the words “Swiss” and “Made.” Furthermore, the movement has been updated from the previous caliber 3135 to the caliber 3235, which has an extra day of power reserve. The 126622 currently sells for an average of 11% above retail price on the private secondary market, and 27% above retail from a dealer. ⁠
⁠
View on Instagram