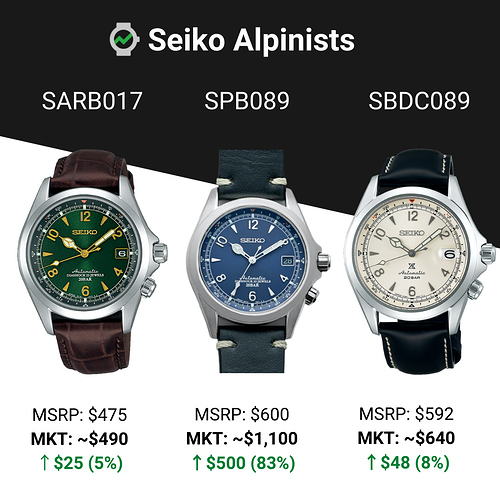 Japan Mountain Climber Watch, The Seiko Alpinist
Which version would you buy?

As one of Seiko’s oldest watch lines, the Seiko Alpinist watches were first introduced in the sixties and still remains a very popular model from the Seiko brand.

The SARB017 boasts an emerald green sunburst dial that changes colors depending on the lighting. It is complemented by gold accents on the markers and hands. The caseback is engraved with the Alpinist logo. At 1mm thick, this older Alpinist is also 1mm thinner than the newer generation models.

In late February 2019, Seiko released the Alpinist SPB089, replacing the original green and gold with a blue dial and silver accents. It is a limited edition of 1959 pieces. Just like the original SARB017, it has a sunburst dial. The sunburst dial allows the SPB089’s dial to look rich dark blue in warm light, but bright navy in bright natural light. The Blue Alpinist was released exclusively through Hodinkee and sold out within minutes of being put on sale. The price increased dramatically over time, and it now trades at almost double the original retail price.

The SBDC089 comes from the latest generation of Alpinist models. With this release, the Alpinist has moved to Seiko’s Prospex line. The watch sports an exhibition caseback and controversial cyclops on the date window. It also received a movement upgrade, from the original 6R15 movement tpo the caliber 6R35, which increases its power reserves by almost 20 hours.