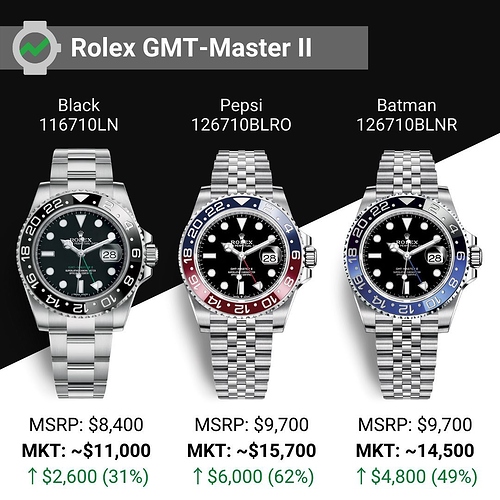 Released in 2007, the 116710LN was the very first steel GMT-Master II with a Cerachrom bezel. It also introduced other technical advances like the Triplock crown from the Submariner and switched the original 16710 red hand from the black bezel GMT-Master to a green GMT hand.

In 1955 Rolex introduced the very first GMT Master: a Rolex Pepsi. The second model, 1675, had one of the longest-running references in all of Rolex’s catalogues with a cycle from 1959-1980.

The first Batman was created in 2013 and was the very first GMT-Master II with a Cerachrom bezel that replaced the original aluminum, acrylic insert, featuring the first two-toned ceramic bezel. It was also the first time Rolex utilized black and blue for a bezel. So why did Rolex choose these colors? It was actually because at the time Rolex couldn’t produce red and blue (like the Pepsi) to their satisfaction with the new ceramic technology. In the newer model, the 126710BLNR, the bracelet is a jubilee bracelet.

Aside from the colors, the Pepsi and Batman are identical. Fun fact: The two-toned bezel’s purpose is to distinguish between day and night times of the bezel’s second time zone. Both watches exhibit a Oyster Steel 40mm case with a triplock triple waterproof system. They both also have 24-hour two-toned cerachrom rotatable bezels.

I’d say my heart is torn between the Pepsi and Batman but it also is hard to compare a delicious soft drink to a classic superhero. Many enthusiasts refer to the Batman as the original now because it was the first to feature the new bezel, but Pepsi was also the first of its two-toned bezel kind. Which do you think is the original?