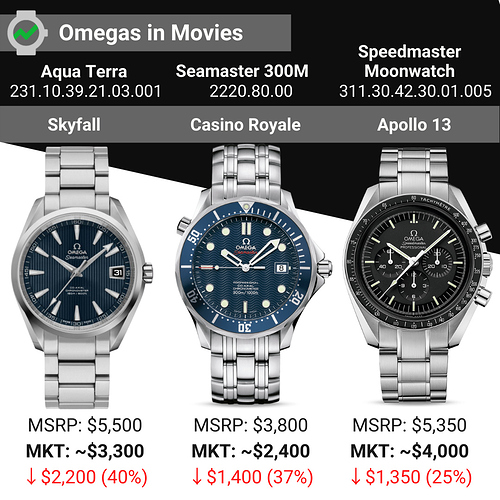 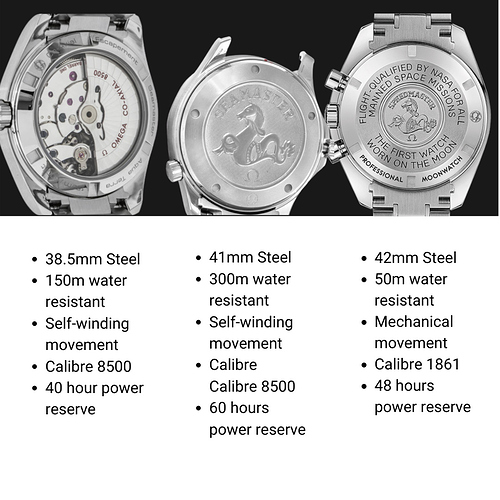 Have you seen these watches on the silver screen? Here are three iconic Omegas made popular by famous movies.

In the 2012 movie Skyfall, James Bond, portrayed by Daniel Craig, wears the Omega Seamaster Aqua Terra. The watch’s stripped dial takes inspiration from the wooden floorboards of luxury sailboats. In addition, the watch has a quick-adjust hour hand, chronometer, and butterfly clasp.

In Casino Royale, Craig wears the Omega Seamaster 300m. “Young men that give little thought to sacrificing others in order to protect the Queen and country . . . you know… with easy smiles and expensive watches. Rolex?” The woman sized him up. “Omega,” replied Bond easily. A special feature of this watch is the helium escape valve, which enables the release of helium from inside the watch to stabilize it in high-pressure environments.

The watch shown is the modern version of the Omega Speedmaster “Moonwatch” worn by Tom Hanks in the movie Apollo 13, based off of the real Apollo 13 mission where an Omega watch saved the astronauts. The watch has also played a major role in six lunar missions. This Omega Speedmaster features a hesalite crystal, a small seconds sub-dial, a 30-minute recorder, a 12-hour recorder, and a central chronograph hand. In addition, the slim bezel includes a tachymetric scale. This timepiece is offered with a special Moonwatch box, a book detailing the watch’s journeys, a NATO strap, and a new edition of the strap given to astronauts involved in the Apollo program.

Which one would you choose?