Patek Philippe Watches for Under $30K

Patek Philippe For Under $30K? Try The Calatrava

The Patek Philippe watch company is considered by collectors and horologists worldwide as one part of the Holy Trinity of Swiss Watchmakers (Audemars Piguet and Vacheron Constantin being the other two). Renowned for their craftsmanship and pushing the limits of engineering and technical excellence in mechanical watch construction, each Patek Philippe timepiece is highly-sought after and is frequently available aftermarket for a much higher price than its original retail value. The Calatrava, with its complicated simplicity, is Patek Philippe’s flagship timepiece. Introduced in 1932, it is a work based on the German Bauhaus design concept. Its modern design and architecture have seen little change since its introduction. The Calatrava has graced the wrists of some of the world’s most influential CEOs, such as Akio Toyoda of Toyota Motor Company and Jack Welch of General Electric. Calatravas were also presented as gifts by no less than Marshall Tito of the former Socialist Federal Republic of Yugoslavia. However, despite its heritage and reputation, the Patek Philippe Calatrava can be acquired for less than $30,000. Here are a pair of men’s and ladies’ watches whose retail prices are reasonable and competitive for a timepiece sold by the finest of Swiss watchmakers. 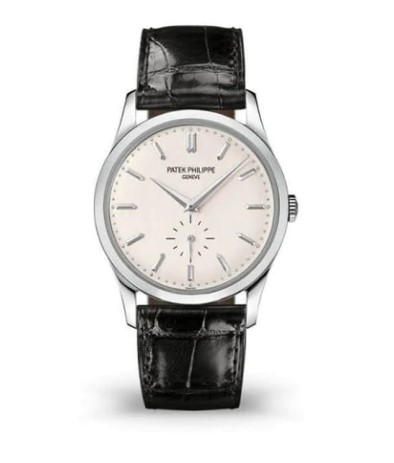 The Patek Philippe Calatrava White Gold 5196G-001 can be considered the “entry-level” Patek Philippe watch for people who seek to be a part of Patek Philippe’s legacy in fine watchmaking. Introduced in 2014, this is also a purist choice. This timepiece is a direct successor of the Calatrava Ref. 96, first introduced in 1932. The polished white gold case is more substantial at 37mm but with a thickness of 8mm, housing a hand-wound Calibre 215 PS movement with 130 components and 18 jewels that beat at a rate of 4 Hz with a power reserve of 44 hours.

Though the size and the movement differ from its renowned ancestor, the 5196G-001 bears the same overall case appearance with dauphine-shaped hands, polished and faceted indexes, and polished silver dots making up the minute ring. The small seconds’ display stands out over the silvery gray dial. The contrast between the finely polished hands and indices and the satin-finished dial makes time reading very easy. The front is protected by a tough slightly-domed sapphire crystal, while the case back is in satin-finished white gold with no markings. The strap is made of a glossy lacquered black alligator skin highlighted with a white gold pin buckle.

The Patek Philippe Calatrava White Gold 6006G-001 appears a slight departure from the rest of the Calatrava line. The 39mm case in polished white gold with a slightly-domed sapphire crystal glass protecting the front feels substantial for a Calatrava. The case back is made of sapphire glass, showcasing its power source with the prominent gold rotor that clearly bears the Calatrava seal. The timepiece is powered by a Calibre 240 PS C with 27 jewels beating at 3 Hz. The Calatrava ref. no. 600X is the only set of watches powered by this movement, characterized by the small seconds’ unique offset position.

Unlike the 5196, the 6006G has an additional date function punctuated by the red-lacquered pointer indicating the date printed on the dial’s outer rim. The minute scale is laid out in a circular guilloché pattern, while the hour and the dates are in Arabic numerals. The dial is ebony-black with a textured appearance making the silvery-white gray indices stand out. The open hour and minute pointer make the time clear to read. Though the dial is two-toned, the richly-textured dial looks vibrant. The strap is made of alligator skin with a fold-over 18k clasp bearing the Calatrava seal that harks back to the classic clasps of vintage Patek Philippe models.

The officer-style 34.6mm case of the Calatrava 7200R-001 is made of rose gold with a time-only function. However, don’t let its understated appearance deceive you. Underneath its silvery-grained dial is what has been known as the workhorse of the Patek Philippe watch company for decades, the 27-jewel self-winding Calibre 240 that has powered perpetual calendars, chronographs, and Calatravas for decades. Beating at 3Hz, it is an ultra-efficient power source with a power reserve of up to 48 hours visible from the case back, highlighted with an 18k gold semi-circular rotor bearing the Calatrava seal.

The dial has distinctive Breguet-style font for the hour indices, while the minute indicators are in small dots of rose gold. The dial appears golden under ambient lighting with the 18k gold minute and hour hands, making time reading very easy. The bracelet is made of alligator skin with a pin buckle.

Introduced at Baselworld in 2016, the 4897G-001 is the direct ladies’ version of the iconic men’s Calatrava 5196G. It shares its dauphin-shaped hour and minute hand, understated appearance, and the power source of its men’s counterpart. Though the case is smaller and more understated than the 5196G because of the lack of a small seconds display, its “night blue” guilloched dial is nothing short of elegant.

The case diameter is 33mm carrying 48 diamonds weighing ~0.47cts, and is ultra-thin at 6.60mm, making this timepiece one of the thinnest among Patek Philippe’s watches. Unlike the 5916G, the case back is made of sapphire glass, clearly showing its hand-wound Calibre 215 power source with the Geneva Seal stamped over the bridge. Its unique strap is night-blue brushed satin that matches the color and texture of the dial.

Patek’s Philippe’s long-standing tradition in fine watchmaking is surprisingly available at its comparatively affordable price point. Fortunately, Patek Philippe is faithful to Calatrava’s design principle while still uncompromising with its renowned craftsmanship and dedication to excellence. Though the watch company’s complications and more expensive models hog the limelight, the purists among Patek Philippe’s enthusiasts still hold the Calatrava in high regard. If you wish to be among those with the honor of taking care of a Patek Philippe for the next generation with cost in mind, then the Calatrava is the perfect Patek Philippe for you. To inquire about Calatrava’s price and availability, call us at (212) 730-5959.