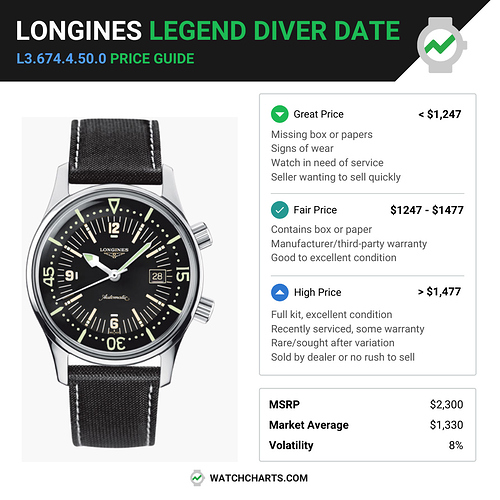 The Legend Diver was first introduced into the Heritage Collection in 2007 without the date. Two year later, in 2009, Longines released a version with the date window. The watch shown is one of those, ref. L3.674.4.50.0, a Longines Legend Diver with Date. In 2011-2012, Longines stopped the production of the earlier version without a date, which felt like a loss to many people. A 10th Anniversary edition with a Milanese bracelet was then released in 2017.⁠

The watch’s design pays homage to the original Longines ref. 7042, a very popular dive watch in the 1960s. The watch has two crowns on the side. The top one is to rotate the diving bezel situated inside the dial while the lower one is to set the time and date. The original 7042 featured a “super compressor” case, referring to the case sealing method that makes the watch extra water tight and pressure-resistant. ⁠

This watch had an original retail price of $2300 but now trades for significantly less on the secondary market. At a bit more than $1000, the Longines Legend Diver is a dive watch offering that stands out from the pack. ⁠