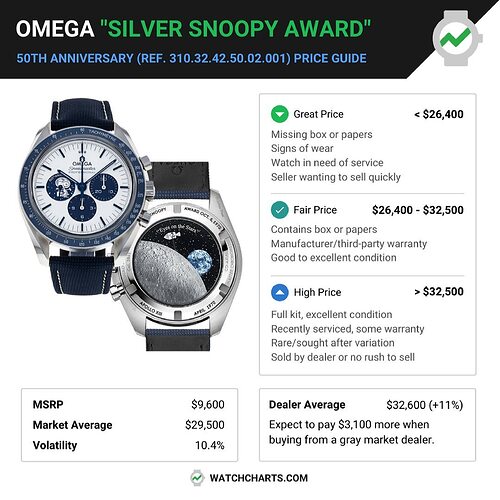 The Omega Speedmaster 50th Anniversary (reference 310.32.42.50.02.001) was created to pay tribute to the 50th anniversary of the Silver Snoopy Award received from Omega in recognition of the brand’s contributions to space exploration. Specifically, it celebrates Omega’s role in helping save the Apollo 13 mission of 1970.

This watch stands out from other special edition Speedmasters due to its spectacular caseback. Covering the bottom half of it is a photorealistic rendition of the moon. On the other half is a starry black sky to give contrast to the bright blue earth and quote “Eyes on the Stars.” Most impressively, operating the chronograph causes Snoopy and his spaceship to orbit the moon on the caseback.