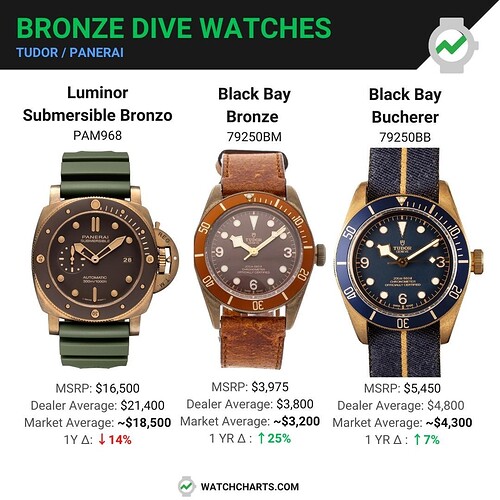 Bronze has been an increasingly popular case material of choice over the past few years. Here are three interesting bronze divers from Panerai and Tudor. ⁠
⁠
The Panerai Submersible Bronzo, reference PAM968, is the latest evolution of the PAM382, which attracted great interest from Panerai collectors. The PAM968 features for the first time a unidirectional rotating bezel with a brown ceramic insert. It trades slightly over MSRP, though prices on the secondary market have been down 14% in the past year. ⁠
⁠
The Tudor Black Bay Bronze reference 79250BM was released at Baselworld 2016 as the brand’s first bronze watch and a fresh look to Tudor’s popular Black Bay line. It was discontinued in 2019 and replaced with the 79250BA, with the same bronze case but a slate grey dial. It can be found on the secondary market priced at the low $3,000s. ⁠
⁠
The Black Bay Bucherer reference 79250BB is yet another Bronze diver from Tudor but made in collaboration with Lucerne-based retailer Bucherer. It was released in 2017 and trades for more than most other Black Bay watches. Prices have been rising about 7% over the past year. ⁠