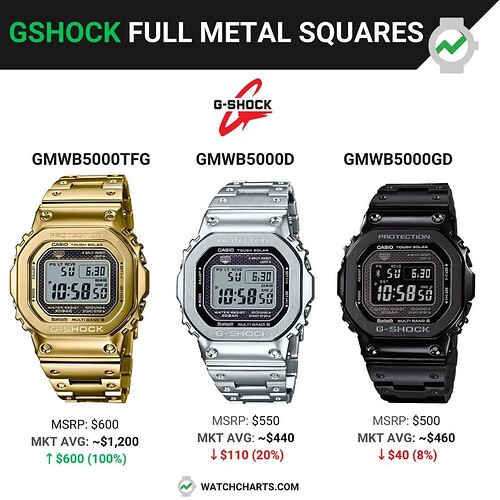 In 2018, for the 35th anniversary of the G-Shock, Casio released the first “full metal square” watches in the collection - G-Shocks with full metal cases and bracelets. These watches all start with the reference GMWB5000, but the different suffixes denote different case materials. ⁠
⁠
The Casio G-Shock GMWB5000 Full Metal Gold was produced in a limited edition, although the exact number of pieces is not clearly known. At the price, of course the watch is not made of real gold. The color comes from an ion plating treatment on the stainless steel. These watches were highly desirable upon release and sold out almost immediately. Today, the market average is about double the original MSRP. ⁠
⁠
The Casio G-Shock GWM-B5000D-1 showcases an all-metal case with a variety of finishes and textures. The flat surfaces are all vertically brushed, but the other parts of the case are polished. Though it was also released as a 35th anniversary piece, it is not limited and can still be purchased new today. ⁠
⁠
Casio also released a fully black ion-plated version of the original GMW-B5000, referenced GMW-B5000GD-1. Both this watch and the stainless steel model without any plating depreciated slightly on the secondary market. ⁠
⁠
Which of the three would you pick?⁠