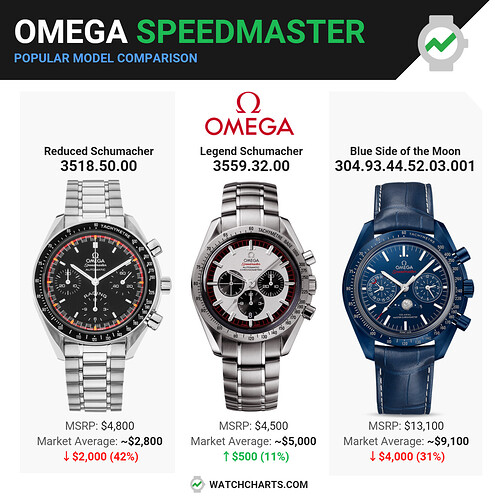 Three different Speedmasters at three different prices – which one is your favorite?⁠
⁠
The Omega Speedmaster Reduced Michael Schumacher 3518.50.00 is a racing dial Speedmaster that celebrates Michael Schumacher’s championship season in 2000. The demarcations on the dial and tachymeter on the black bezel make it easier to distinguish minutes, seconds, and fractions of seconds at a quick glance; and the watch’s case back features an engraving of Schumacher’s signature and the words “World Champion 2000.” Inside, the watch features an automatic caliber Omega 3220. It sells for a steep discount from MSRP on the secondary market, which is not unusual for a Speedmaster Reduced. ⁠
⁠
Released in 2004, the Omega Speedmaster Michael Schumacher Legend 3559.32.00 is a more feature-rich racing watch compared to the Speedmaster Reduced, dedicated to Schumacher’s sixth world championship title. The watch includes an engraved case-back with the words “Michael Schumacher The Legend,” a tachymeter/small seconds bezel, chronograph, and an Omega caliber 3301. This model is rarely traded on the secondary market, but our data shows a market average of around $5,000.⁠
⁠
The Omega Speedmaster “Blue Side of the Moon” 304.93.44.52.03.001 is one of the modern evolutions of the classic Speedmaster. Launched in 2017, this watch pays homage to the fact that an Omega timepiece has been worn on all 6 American lunar missions. Its name and color are inspired by the dark blue night sky. Inside, the watch is powered by an Omega Co-Axial Master Chronometer 9904. Though this watch retails for $13,100, the market average is quite significantly lower. ⁠
⁠
As Omega’s most iconic watch, you can’t go wrong with the Reduced, Professional, or Blue Side of the Moon. At significantly different price points, which one would you pick?⁠