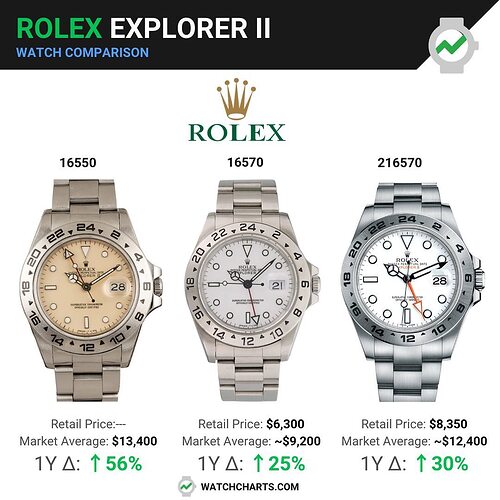 With the recent release of the 50th anniversary Rolex Explorer II, reference 226570, let’s take a look at the market values for three of previous generation Explorer II models. (We’ll also post the analytics for the 226570 once the market for them stabilizes.)

The Rolex Explorer II Ref. 16550 was in production between 1985 and 1989. This model is known for introducing the two dial options that have remained popular to this day: a black or white (Polar) dial. The Polar dials had a paint defect that made it slowly turn into a cream color. This unique aspect made the watch highly demanded by collectors. According to our data, the secondary market price for this watch has increased over 50% in the past year.

The Rolex Explorer II Ref. 16570 replaced the aforementioned 16550, and was in production from 1989 through 2011. This reference introduced the new caliber 3185 movement and changed the silver outlined hands and indices to black, allowing them to become much more legible against the which dial. The font for the bezel numerals also changed.

In Baselworld 2011, the Rolex Explorer II 216570 was released to replace the 16570 which had been in production for over 20 years. Most uniquely, the size of the watch was increased from 40mm to 42mm. It also hosts a new movement and an orange 24-hour hand as a tribute to the iconic “Freccione” Explorer II from the 1970s. It was in production until this year, when it was replaced by the 226570.