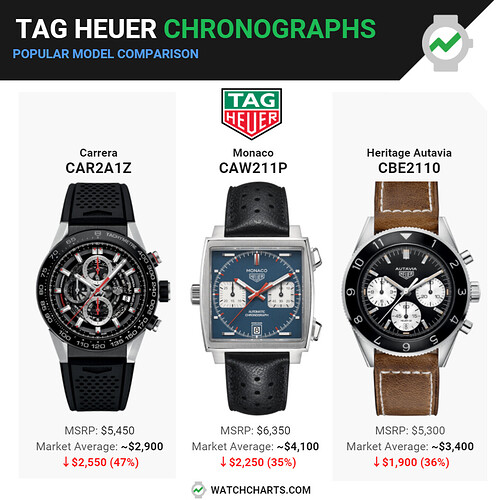 Some of TAG Heuer’s most iconic chronographs – which one is your favorite?⁠
⁠
The TAG Heuer Carrera CAR2A1Z.FT6044 is a bold 45 mm racing watch inspired by high-performance motor racing and mechanical precision. Within the skeletonized, modular case, this watch features an in-house caliber HEUER01 Automatic movement with 50 hours of power reserve and a tachymeter bezel for enhanced precision. This watch currently sells at a market average of 47% below MSRP, making it a great high-performance chronograph and below $3,000.⁠
.⁠
The TAG Heuer Monaco CAW211P.FC6356, which was an icon of the “King of Cool” Steve McQueen, is one of the most recognizable TAG Heuers and was the first square and waterproof chronograph in the world. Within its square steel case is a caliber 11 Automatic movement with 40 hours of power reserve and a famous left-facing crown. This watch, though more expensive than the Carrera, provides great value at 35% below MSRP on the secondary market.⁠
⁠
The TAG Heuer Heritage Autavia CBE2110.FC8226 first made headlines when TAG Heuer announced its “Autavia Cup,” which was a design campaign driven for a re-issue of the classic Autavia watch via public voting. The public voted for this design, inspired by the original reference 2446 vintage Autavia. Underneath its striking black and white “panda” dial is a caliber Heuer 02 movement with a surprising 80 hours of power reserve. This watch’s classic design and powerful functionality make it a great choice for vintage racing-watch enthusiasts at a market average price 36% under MSRP.⁠
⁠
What do you think of these TAG Heuer chronographs? Which design speaks to you the most?⁠