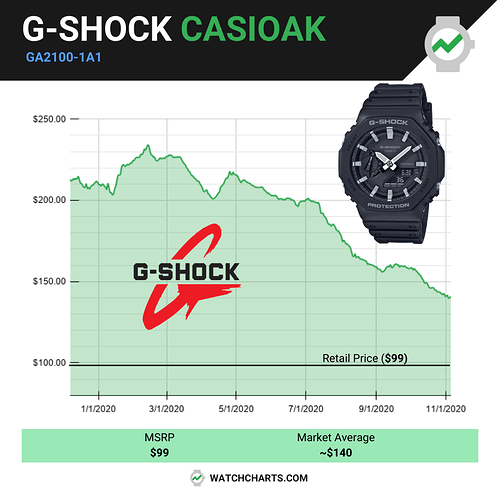 This is the one-year price history for the G-Shock CasiOak - what do you think?⁠
⁠
Since 1983, G-Shock watches have been known to be tough and rugged. In 2019, Casio released the G-Shock GA2100-1A1 at a retail price of $99. This watch was quickly nicknamed the CasOak, due to its resemblance to the Audemars Piguet Royal Oak. ⁠
⁠
The CasiOak is very popular among G-Shock fans due to this thinness, wearability, and affordability. However, prices skyrocketed to more than double the original MSRP at one point after release. Over the past few months, the market has come down a bit, but still trades around 50% higher than the original retail price.⁠
⁠
A variety of color options are available, but the black model is typically the most expensive. ⁠