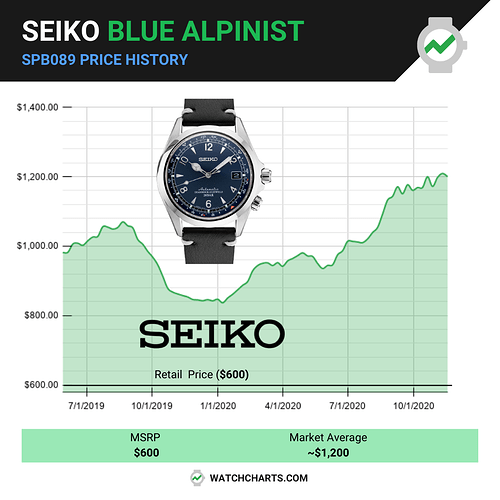 The Seiko Blue Alpinist - a future collectible?⁠
⁠
The Seiko Blue Alpinist is a IG@hodinkee limited edition release of 1959 pieces. The production quantity honors the year the original Seiko Alpinist was released. The blue dial color was highly desirable compared to the traditional green SARB017. The watch features an inner rotating bezel, which is controlled by a second crown at the 4 o’clock position. ⁠
⁠
This watch quickly sold out upon release and was immediately listed on the secondary market for around 50% higher than the original MSRP of $600. Though the price came down a bit near the end of last year, interest has since increased and the watch now trades at around double its original MSRP.⁠
⁠
For less than half the price, you can get a SARB017, a functionally equivalent watch with a green dial. Is the Blue Alpinist worth the price?⁠