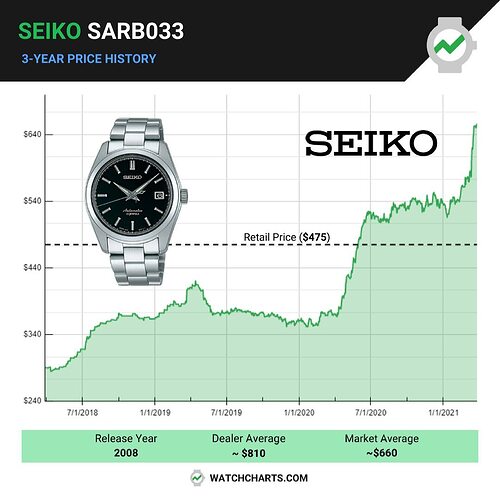 The Seiko SARB033, or its white dial variant SARB035, are frequently touted by collectors as some of the best entry-level watches you can buy. Originally released in 2008, this watch was announced to be discontinued in 2018, though it was still widely available for purchase new through 2019 and the beginning of 2020.

However, secondary market prices began climbing as new supply for this watch began to dry up. Prices climbed steadily throughout 2020 and just recently shot up again in 2021. The watch now trades way above retail and its value has doubled over the past three years.

Is the SARB033 worth the price? What other watches would you recommend at this price point?

I was not a fan of the case shape or hands on this one, looks better without lume. Cannot believe people would pay so much for this watch, as it’s really not that special. I paid less for a SARX033 which has much more interesting case shape, nicer bracelet, and no lume on the dial (personal preference). Same movement, not so much a good or bad thing.

The 6R is a decent movement at the price range, but I would not say it’s equal to an ETA 2824/SW200 as those have far better positional variance accuracy and are available in quite a number of watches in the same price range. I think some have an axe to grind against any Swiss movements though and will prefer a Japanese movement regardless. I have several of both and all are fine, but the Swiss movements are more accurate and consistent in different positions. Several are adjusted and regulated from the factory, whereas none of my Seikos are (another shortcoming IMO).