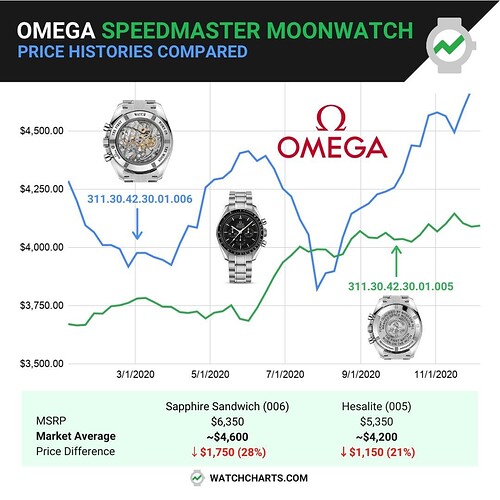 Price histories compared: sapphire sandwich versus hesalite Speedmasters!⁠
⁠
The Omega Speedmaster Moonwatch 311.30.42.30.01.006 (sapphire sandwich) and 311.30.42.30.01.005 (hesalite) are very similar at first glance – they have the same case material, size, tachymetric bezel, chronograph feature, small seconds complication, water resistance, and dial color. However, there are a few minor differences: the 006 has a clear case-back while the 005 has a solid, engraved one; the 006 has a caliber Omega 1863 movement while the 005 has a caliber Omega 1861 (both with 48 hours power reserve); and the 006 has a sapphire crystal while the 005 has a Hesalite crystal. ⁠
⁠
While these watches may look alike, their price histories (year-to-date) have been very different. While both currently sell on the secondary market at an average below MSRP, the 006 has had a tumultuous price history with fluctuations between $3,800 and $4,700; meanwhile, the 005 has had stable but minor growth from $3,700 to $4,200. The large price changes that occurred in June/July for the 006 can likely be attributed to the official release of the new Speedmaster Moonwatch 321 that featured a movement inspired by the original caliber 321 worn by astronauts during the first spacewalk of 1965.