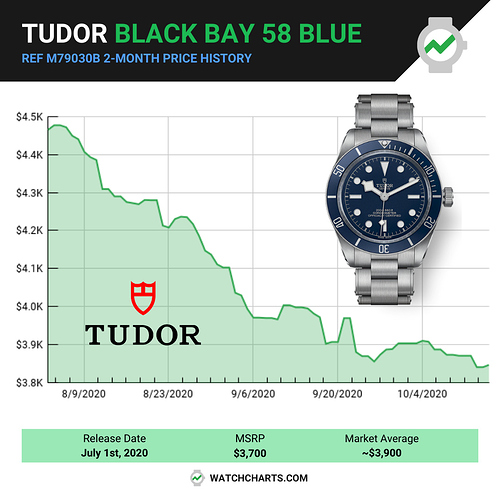 ⁠
⁠
The new Tudor Black Bay 58 (M79030B) is a ⁠new addition to the Tudor Black Bay 58 lineup originally released in 2018. This new blue version features a blue dial and bezel with silver applied indices, white lume-spots and a white minute track and lettering. It maintains the original Black Bay 58’s 39 mm case, in-house Calibre MT5402 self-winding movement with a 70 hour power reserve, 200 meter water resistance, and a domed sapphire crystal. Per Tudor’s official website, the MSRP is $3,700. Despite initially selling at 22% higher than MSRP on the secondary market, its market price has already begun trending down and now only sells at 5% higher than the MSRP. ⁠
⁠
What do you think of the Tudor Black Bay 58 Blue? Do you think its market value will continue to come down? Where will the price settle?⁠