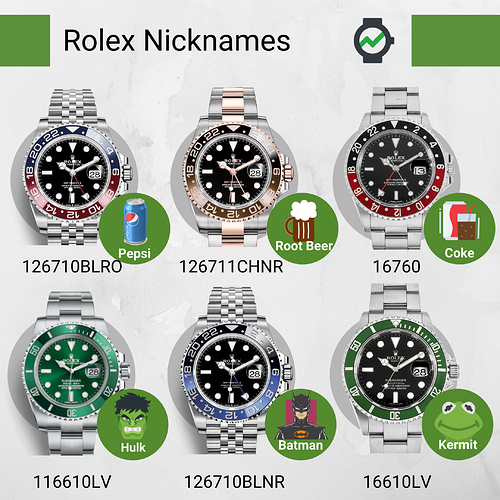 Pepsi - The very first GMT Master was introduced in 1955 with a Pepsi bezel. It was initially created to match the Pan American Airline colors, but the watch was nicknamed “Pepsi” due to the blue and red bezel. The latest 2018 Pepsi, 126710BLRO, is overwhelmingly popular with watch enthusiasts.

Root Beer - The Root Beer GMT has a brown and gold color profile, resembling a frothy root beer soda. It keeps the trend of soft-drink related nicknames. Some renditions of the Root Beer GMT are all-gold with brown dials and bezel inserts.

Coke - The Coke is also commonly referred to as the “Fat Lady.” It was released in 1983 as the first GMT-Master II with an independently adjustable 24-hour hand. The case is slightly thicker than the previous GMT-Masters with a more rounded appearance earning its nickname - “Fat Lady”. However, the red and black bezel insert also provided yet another soda nickname: Coke.

Hulk - The Hulk is a true 21st century Rolex: modern, flashy, with a more robust bracelet and greater wrist presence. This is the first time Rolex created a Submariner with colors other than black or blue for the dial and bezel. The use of bright green prompted the nickname Hulk.

Batman - The Batman was released in 2013 and was the very first Rolex to feature a two-toned ceramic bezel. It was also the first time Rolex utilized black and blue for a bezel design. At the time Rolex couldn’t produce red and blue (like the Pepsi) to their satisfaction with the new ceramic technology.

Kermit - The Kermit was released in 2003 to commemorate the 50th anniversary of the Submariner. It features a green bezel, like that of Kermit the frog. However, it was replaced in 2010 by the Hulk, which is still in production today.