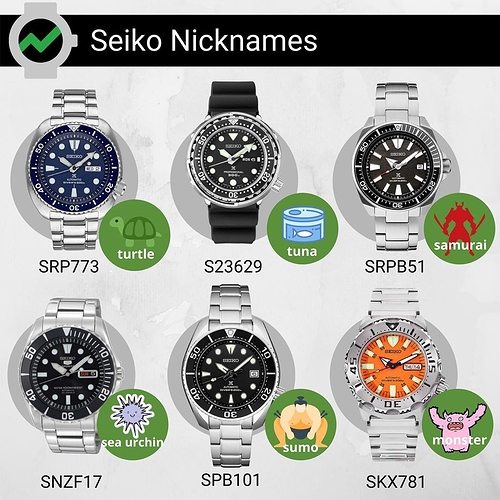 Turtle - Truly a cult favorite. This watch’s name originates from the shell of a turtle with the “cushion case”. If you flip the watch over, it looks like a turtle laying on its back. The classic Seiko dive watch was originally released in 1977 and reissued 3 decades later.

Tuna/Tuna Can - Its name comes from the chunky bezel, often compared to someone strapping on a tuna can to your wrist. It’s an entire 48mm in diameter with its origins dating back to 1975 with the Grandfather Tuna (6159-7010). The massive cylindrical shrouded-case design can also be seen in other variants such as the “Baby Tuna” (SRP637), “Emperor Tuna” (SBDX011), and “Darth Tuna” (SBBN013).

Samurai - Samurai’s name traces back to its sword-shaped hands on the original. It’s also the only Japanese release available in both titanium and steel. Just this recent February, Seiko brought back the Samurai with a limited edition Blue Lagoon (SPRB09). Another version of the Samurai you can find is a bright orange dial variant.

Sea Urchin - Some theories people have for the Sea Urchin’s name is from the relatively long minute markings on the dial, resembling the spines of an aquatic animal. It’s a clean and simple diver from the Seiko 5 line, available for less than $150.

Sumo - Theories about the creation of the watch’s name is how the marker at 12’oclock closely resembles the underwear worn by Japanese sumo wrestlers during a match - the “Mawashi”.

Monster - The jagged teeth-like bezel helps label the watch as the “Monster.” It has large indices with bright lume, bold styling, and tough build quality. It can be recognized by its extremely large hands and indices and is a more affordable tool watch launched in 2000 as part of the SKX line.