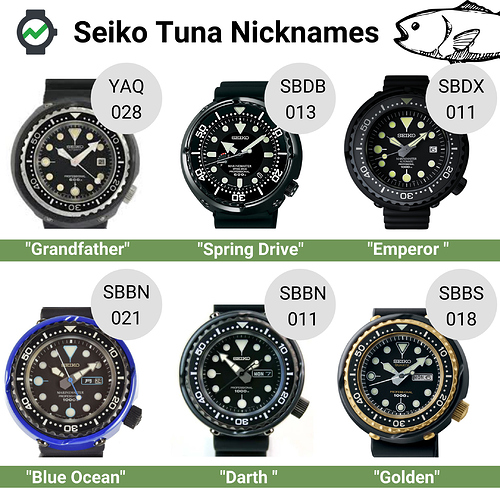 The Grandfather Tuna was released in 1975 and was the first Tuna ever produced. It featured the same mechanical Calibre 6159B movement as earlier Seiko divers models, but it was the first watch ever to have a titanium monocoque case. It also was the first to use an L-shaped gasket and vented rubber strap. Because it was at the forefront of a long line of Tunas, it received the nickname of “Grandfather”.

When Seiko put one of its iconic Spring Drive movements into the Tuna case, the Ultimate Tuna was born! The SBDB009 was released in 2013 to celebrate Tuna’s 100th anniversary and was limited to 300 pieces, featuring golden accents similar to the Golden Tuna. The Spring Drive-powered Tunas were so popular that Seiko launched the Spring Drive Tuna. This borrows the all-black case of the Darth Tuna.

Emperor Tuna was a different kind of watch than the Grandfather and Golden Tuna. They replaced the Hardlex crystal with sapphire crystal and upgraded its watch to a traditional movement rather than the previous quartz Tuna watches. Sadly, this model is Japan-exclusive and that gave it its name: Emperor Tuna.

The Blue Ocean Tuna is a 2011 Limited Edition to celebrate 130 years of Seiko. Seiko only made 400 pieces of the SBBN021. Because it featured blue accents and was part of the MarineMaster collection, it was quickly nicknamed the Blue Ocean Tuna.

The Golden Tuna was released in 1978 and featured a quartz movement. The nitride coating gave the model a golden color against its titanium case and thus the name Golden Tuna was born. Fun fact: this model made an appearance in the 1981 James Bond film “For Your Eyes Only”.