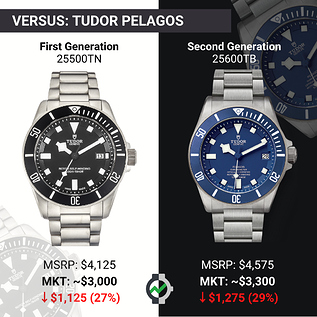 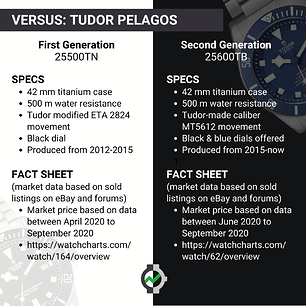 Pelagic (ajd.) - relating to the open sea. What do you think of Tudor’s two generations of pelagic Pelagos dive watches?

Ever since Tudor’s extensive rebrand in 2012 to differentiate itself from Rolex, the Pelagos has become an important part of the Tudor lineup. The Pelagos was initially designed to be a blend of both a luxury watch and a tool watch, combining form and function to create a distinguished dive watch. Featuring a specially designed helium escape mechanism, the Pelagos 25500TN features water resistance at a remarkable 500 m, more than twice the depth of the next highest Tudor watch.

After years of circulation, Tudor decided to refresh the popular Pelagos model. In 2015, Tudor released the second generation Pelagos 25600, with an in-house Tudor MT5612 movement system and a new blue color. Outside of those two changes, the newer model maintains the same titanium construction and water resistance and remains similar to the old model.

What do you think? Does Tudor’s in-house movement or water resistance have any significance in your eyes? Would you be willing to pay $300 more for the newer version?