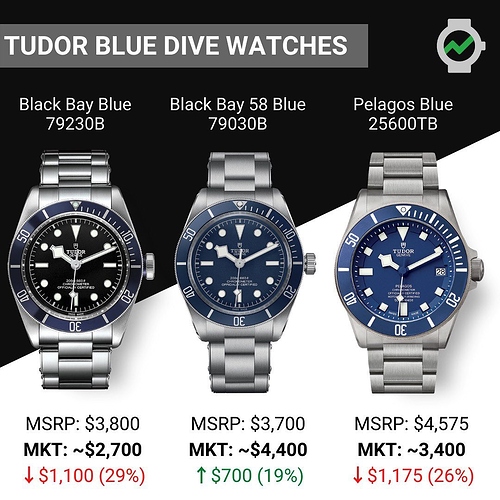 Tudor released both the Heritage Black Bay and the Pelagos in 2012. The Pelagos features square hour markers with a triangle at 12, 6, and 9 o’clock and a date window at the 3 o’clock mark. The newest addition to the Tudor lineup is the Black Bay 58 Blue, which gained instant popularity with collectors. As you can see from the infographic, it is currently trading around 20% over MSRP!
.
The latest Black Bay 58 is a refreshing update to the original, released in 2018 and featuring a black dial with gold accents. This new version brings the 58 lineup into the 21st century, with a more modern aesthetic and striking design. The original 58 saw long AD waitlists and strong secondary market value retention. It comes as no surprise that the same can be said for this release.