Two Oris Big Crowns: which do you prefer?⁣⁣ 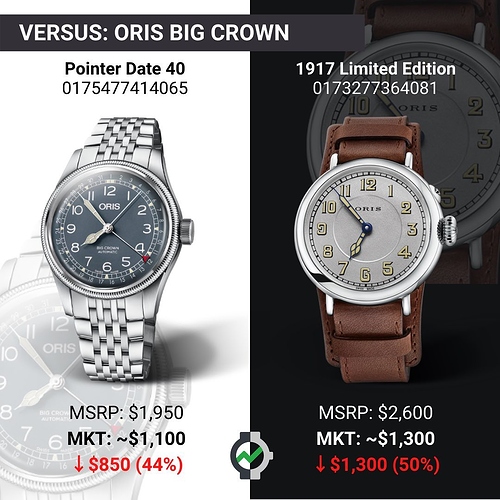 Despite being a relatively overlooked part of Oris’ collection, the Pointer Date 40 is a pilot watch that incorporates both vintage and modern elements. The oversized crown, featured in both watches, was designed to make it easier to operate the watch while wearing pilot’s gloves. The watch draws from many vintage inspirations, such as the font used for the numerals, the pointer date complication, and the crown.⁣⁣
⁣⁣
⁣⁣The Oris Big Crown 1917 is a 40 mm pilot watch that doesn’t have a date complication nor a second hand. The watch is inspired by Oris’ very first pilot watch and released in 2017, on its 100th anniversary. It was also limited to 1,917 numbered pieces. While the MSRP is $2,600, you can typically find one of these watches for around half off on the secondary market.⁣⁣
⁣⁣
⁣⁣The Pointer Date 40 and 1917 both offer a high-quality watch from one of the world’s premier independent watch companies. Would you rather have the more modern Pointer Date 40 or the vintage-inspired 1917 Limited Edition?⁣⁣