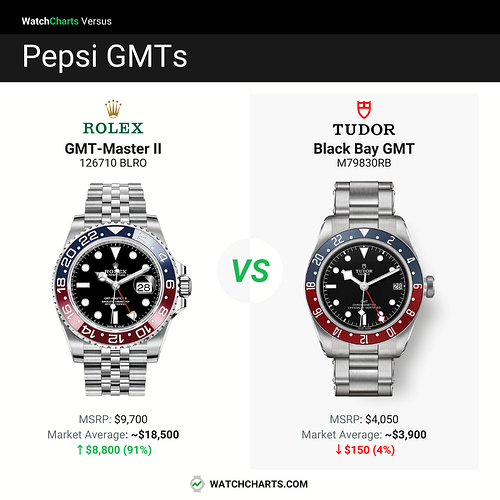 Two GMT watches with the “Pepsi” bezel configuration – which one is your favorite?⁠
⁠
The Pepsi colorway, which featured blue and red on the bezel to help delineate between day and night for a second time zone, was originally introduced by Rolex in 1955 but has been carried on to newer models. In 2018, a Pepsi GMT-Master II was released and featured a 24-hour rotatable bezel, which allows for temporary time zone adjustment, and two different hour hands for two programmable time zones. It features Rolex’s in-house Caliber 3285 Movement with 70 hours of power reserve and a water resistance of 100m. While this classic part of Rolex’s lineup retails at $9,700, it retails at over 90% of its MSRP. ⁠
⁠
For those looking for a cheaper GMT watch that also features a Pepsi bezel, the Tudor Black Bay GMT may be just right. Released in 2018, it features an in-house MT5652 movement, stainless steel construction, and 200 meters of water resistance. It currently retails for $4,050 but sells at a market average of $3,880.⁠
⁠
Regardless of which watch you choose, both of these watches provide great functionality, features, and construction along with a unique colorway. ⁠