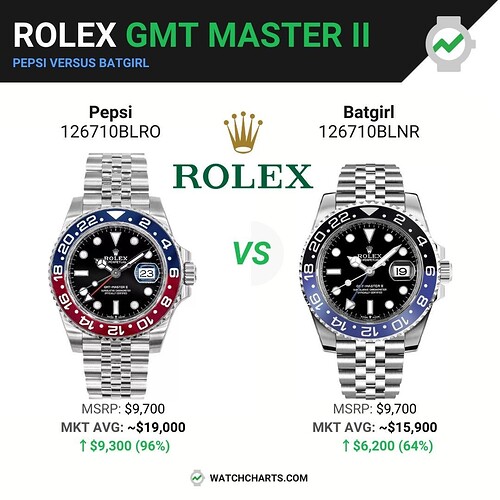 Rolex GMT Master II Pepsi vs. Batgirl - which would you pick?⁠
⁠
Released in Baselworld 2018, the GMT Master II Pepsi (reference 126710BLRO) was popular from the beginning. Since its initial release, this watch has only sold above its retail price. It’s name is derived from it’s red and blue ceramic bezel. ⁠
⁠
The 126710BLNR GMT Master II (Batgirl) gained its name from its dual tone blue and black ceramic bezel. This version of the watch is an evolution of the previous Batman, reference 116710BLNR. The most notable difference between the Batgirl and Batman is the use of a jubilee bracelet instead of an oyster bracelet.⁠
⁠
Both these watches are very difficult to find at retail, though the Pepsi currently trades on the secondary market for significantly more than the Batgirl. Is it worth the premium? Which one would you pick?⁠