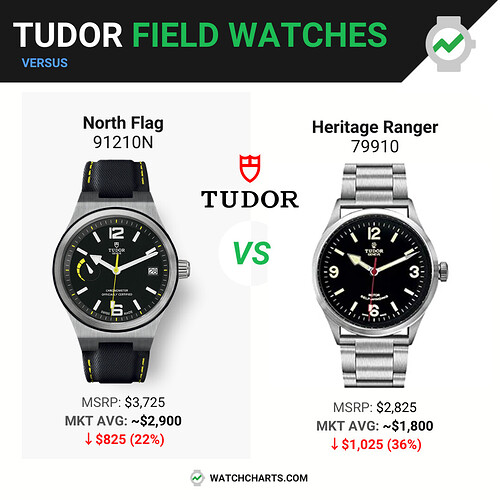 Though overlooked by many, the North Flag, released in 2015, serves as a crucial milestone for Tudor– Tudor was launching a new model fitted with an in-house movement, both significant firsts for the watch company. While modern and sporty, the splashes of yellow give this explorer’s watch a touch of playfulness. Another feature that stands out is the sharp geometrical case. A rare exhibition caseback from Tudor shows off the in-house movement within. ⁠
⁠
The Tudor Heritage Ranger was released in BaselWorld 2014. This watch very much resembles the Rolex Explorer and could be considered a more affordable alternative. The crystal is domed to give the Ranger more of a vintage look. The choice was also made to use painted instead of applied markers to more closely resemble dials from the 1960s. ⁠